I like who chooses carefully. The words not to say. (Alda Merini) 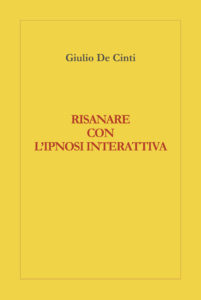 The book is available only in Italian.

“Restoring with Interactive Hypnosis” is structured in two parts, each of which is introduced by a theoretical examination followed by many illustrative cases. The latter, accompanied by explanatory comments, describe the procedures and document the effectiveness of the Interactive Hypnosis.

The definition of “Interactive Hypnosis” stems from the consideration that its methods allow the unconscious to be an active protagonist of the communicative exchange. The patient is asked to use the non-verbal channel, while the hypnotherapist, although he communicates orally, at any stage of the procedure uses the suggestions.

The first part focuses on the effective dialogue with the unconscious. The Interactive Hypnosis allows to know the real problems of the patient, without the mediation of the interpretations. The procedures lead the patient to the hypnotic trance when the therapist turns to him, while he is present to himself, asking him to stop the voluntary response and wait for the unconscious response that is expressed through the hypnotic phenomenon of levitation of the arms (raises the right for the “Yes” and the left for the “No”, in the right-handers), or through an ideo-motor signal (bringing the torso forward for a “Yes” and backwards for a “No”). The most surprising result was found when, in several cases, the unconscious was willing to perform the “spelling” to identify the name of a fear that the conscious mind was not able to provide.

The second part describes the methods used to carry out the restoration, none of which makes use of suggestions. It is believed that change takes place essentially in the unconscious, which is divided into two parts: healthy and unhealthy. The change is to strengthen the healthy part and to weaken the unhealthy part. The healthy unconscious itself can heal when it is called upon to do so during the state of trance that is activated while the patient is present to himself and requires him to do nothing intentional. The change is sometimes produced in a single session, other times in more steps. An effective procedure was to propose to the unconscious to continue the rehabilitation in the days between one session and another without the patient, on a conscious level, being asked to do anything.

It is possible to verify the results that can be obtained with the Interactive Hypnosis in the video gallery.